Stay up to date

More than a Pumpkin Patch

After a hot and smoky summer, many are enjoying the relief of clean, crisp fall air and bundling up under blankets with coffee, cocoa or cider to help ward off cool evenings. October is a time of harvest and celebration and also leads up to many kids’ favorite fall evening—Halloween. Who wouldn’t love dressing up as their favorite superhero, Disney princess or scary pirate or ghost and trekking around the neighborhood to acquire a year’s worth of sweets in one night? For many
105 views0 comments

Who says dreams can’t come true for small-town athletes from North Idaho? Just look at the accomplishments of Jerry Kramer who, after decades of waiting, finally received his induction into the NFL Hall of Fame just last month. The 56th class was announced earlier this year in Minneapolis during Super Bowl weekend. In order to be inducted into the class of 2018, Kramer had to receive 80 percent of voting support from the Pro Football Hall of Fame’s selection committee. It was
104 views0 comments

At just 10 years old, David DaVinci performed his first professional magic show, wowing audiences with his thrilling and unexplainable illusions. At age 18, he became the youngest magician in history to win the Gold Medal in the Pacific Rim Professional Stage Championship, making him a World Champion Magician before he graduated high school. Today, 25 years after his first performance, this Spokane native and Sandpoint resident is still impressing audiences across the globe.
37 views0 comments

Fine Food on the Move

One of the guilty pleasures of attending the state, county or regional fair is gorging one’s self on all the deliciously sinful fair food. Deep fried everything, sugar-blasted batter and just about anything on a stick, all treats we allow ourselves during the annual evening out. These foods are highly processed and usually concocted in a stand, trailer or truck, and although delicious, one wouldn’t want to subsist on these foods on a regular basis. The stigma that food prepar
44 views0 comments 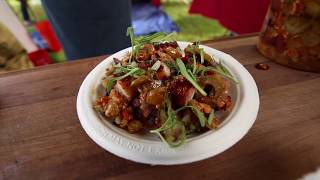 Crave! is quickly approaching! Check out this video and see what YOU could be apart of! This is an event that you will NOT want to miss :) Check out this link as well for more info and tickets: https://www.facebook.com/events/159607081350924/ #event #local #livinglocal #goodnews
13 views0 comments

There’s something about a car show that always seems to bring in a crowd. Perhaps it’s the car-enthusiast community, a tight knit bunch, many of whom put all their extra hard-earned money into the hobby they cherish so much. It might be the nostalgia, seeing a vehicle you drove as a teenager, bringing back memories of carefree summers and the freedoms and irresponsibility of youth. Perhaps it’s showing the next generation beautiful pieces of history, engines that didn’t need
39 views0 comments
12
3
45